Tibor de Nagy is pleased to present Jesse Murry Radical Solitude an exhibition of paintings and works on paper from the late 1980s to the early 1990s. This is the first solo exhibition of the artist’s work since his death in 1993. This show is curated by the artist’s friend Clay Hapaz. A fully illustrated catalogue will accompany the exhibition with an essay by Alex Fialho.

The exhibition will focus on work made in New York after the artist graduated from Yale in 1986 with an MFA in painting. Although he was deeply inspired by the Romantic landscape tradition, particularly Turner, Constable, and Friedrich, he used landscape not so much as the subject of his work, but as the form through which the mind can freely interpret the dynamic and transient conditions of climate and weather, light and atmosphere, not as events in nature but as events of the imagination.

Murry’s primary source was the poet Wallace Stevens who he considered to be the true great Post-Modernist mind. Like Stevens, Murry felt that in an age of disbelief, we can only save ourselves through a willing suspension of disbelief, by an act of mind or the imagination. Murry sought not transcendence but a reaffirmation of existence through the mind, and the mind’s image of itself conceived within the context of the landscape. Murry believed, as did Stevens, in art as a supreme fiction: it must be abstract, it must change, it must give pleasure.

Murry’s work was last seen in New York in Hilton Als’ exhibit James Baldwin/Jim Brown and the Children at the Artist’s Institute at Hunter College in 2016 where Murry was linked with composer Julius Eastman and writer Gary Fisher - two other radical black, gay artists whose work was underknown at the time of their early deaths.

Jesse Murry was born in Fayetteville, North Carolina in 1948 and raised in Greenburgh, NY. He studied philosophy and art at Sarah Lawrence. He moved to SoHo in the late 1970s, living at 431 Broome Street, where his neighbor and close friend was video artist Tom Rubnitz. He immersed himself in the art world of the time and wrote criticism and essays for Arts Magazine and other publications. He curated Reverend Howard Finster at the New Museum in 1982. He did artists lectures and taught art history at Hobart College. All the while, he painted. At the age of 36 he entered the MFA program at Yale. Not long after graduating he began to exhibit with Sharpe Gallery in the East Village. Jesse Murry died in January of 1993.

The exhibit will consist of thirteen works – eight oil and beeswax paintings on linen, and five watercolors on paper. A selection of his writing will also be on view in the exhibition. 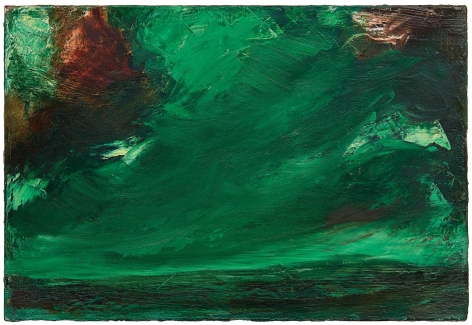 When he died of aids, at the age of forty-four, in 1993, the painter Jesse Murry left behind a number of canvases and works on paper in his New York studio that not only revealed a dreamy, lyrical talent but also hinted at the deeply detailed artist he would have become. In a small show at the Tibor de Nagy gallery (through Jan. 12), the artist’s beautiful color sense is on full display, as is his interest in abstraction as a kind of landscape filled with the splendor of the earth and the expansiveness of the sky. Murry’s works are not large in scale, but they promote big dreams: his terrain is the unfettered mind and eye. He draws you in with his liquid awareness of how paint works on canvas, and how color and form can and should be handled delicately, and with respect.