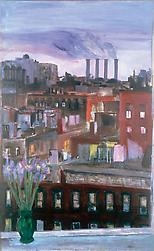 After losing a villa in Budapest, being imprisoned by both Germans and Russians, and
immigrating to New York, Tibor de Nagy, with John Bernard Myers, founded a
marionette company. It failed as a marionette company but reemerged, in 1950, as the
Tibor de Nagy Gallery. In honor of its 60th anniversary this year, the gallery, which was
also a center for the New York School of poets, has mounted a copious but deftly
balanced show called "Painters and Poets."

You are greeted at the door by the poets James Schuyler and John Ashbery, in Fairfield
Porter's painting Jimmy and John. They sit in the same room but not quite together,
gazing off with concentration as if posing for a portrait is one thing on their minds, but by
no means the only thing. This is appropriate because Mr. Porter's cool, tan portraits,
several more of which punctuate the walls, are less about the final effect achieved than
the act of looking thoughtfully, and the show altogether is like passing through the
middle of a large and urbane but suspended conversation

There are, of course, simple collaborations, like two American flags with poetry over
them by Joe Brainard and Ted Berrigan, a large collage by Larry Rivers and Kenneth
Koch, two paintings by Frank O'Hara and Grace Hartigan, and Stones, a set of 13
lithographs by Mr. Rivers and Mr. O'Hara. Joan Mitchell contributes two light, simple
color- field drawings for poetry of Mr. Schuyler's. (A squarish yellow sun accompanies
"Daylight": "And when I thought, / Our love might end" / the sun / went right on
shining.") There are complex collaborations, like the charming, three-panel painting
Triptych: Madonnas and Poets, by Red Grooms and Ann Waldman of Marianne Moore,
William Carlos Williams and Jack Kerouac with their poetry, or Rudy Burckhardt's photo
of Messrs. Rivers and Koch with their poem-painting New York, New York. And there is
the network of acquaintance among the pieces themselves: Jane Freilicher's lovely,
deceptively simple portrait of a painter's table, with brushes, turpentine and tubes, and her
equally sweet study of the smokestacks, purple sky and yellow windows of New York at
night, hang across the room from Nell Blaine's vivid portrait of Ms. Freilicher herself
reading. Mr. Koch, in Mr. Porter's portrait, is also reading, and both of them, you must
suppose, are reading one of their colleagues' books published by Tibor de Nagy Gallery
and displayed here under glass.

The single most often recurring note in this conversation among friends is the poet Frank
O'Hara. He appears in a good-natured ink drawing by Ms. Blaine, a plaster bust by Mr.
Rivers, a short film directed by Richard O'Moore, a straightforward silver print by Fred
W. McDarrah, striding purposefully out of the Museum of Modern Art, and, I felt almost
sure, standing next to me in the elevator on the way out of the building, on his way to get
a cup of coffee at a diner downstairs.