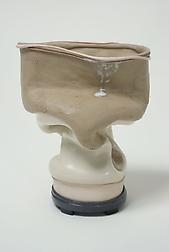 
Kathy Butterly is an American original whose closest forbearer is George Ohr (1857-1918), "The Mad Potter of Biloxi." The formal traits she shares with Ohr include a penchant for crumpled shapes, twisted and pinched openings, and making (as Ohr was understandably proud to point out) "no two alike." Working within the confines of the fired clay vessel, Butterly has transformed this historical convention into something altogether fresh and new, melding innovation to her imagination so precisely that it is impossible to separate them. Walking around the 14 sculptures mounted in the center of the gallery, none of them bigger than a coffee cup, it occurred to me that the death of painting (or the novel, poetry, or ceramics, for that matter) might largely be a comforting fiction for those threatened by creativity or haunted by the lack of it. For what makes Butterly's work new isn't just her mastery of technique—we have seen all kinds of "new" art in the last century and the beginning of this one—but rather its unbreakable connection to meaning, and the different ways she equates form and content. As much as these pieces delight the eye (and the hand), they do not stop there. It is the mind that they most deeply engage, and the capacity to reflect and speculate within the imaginative space they open in us, if we let them. This is why her work is so necessary.
Butterly is completely at home in a vernacular vocabulary that embraces domestic life (baking cakes and soufflés), scatological humor, flea markets, cartoon and horror film effects, and these are only the most obvious inspirations. Their bulbous, folded, collapsing, twisting, threatened forms are enthralling, comic, and distressing—they look like weird, shr unken hybrids of alien life forms and domestic objects from which something is oozing, leaking, or dripping. Starting with the pedestal or base on which they "rest," each sculpture consists of a stack of interlocking oppositions: rough and smooth surfaces, cracked and impeccable glazes. Neither the distinct parts nor the whole form take precedence over the other, but coexist so that everything beckons us to look more closely, to make connections, wild as they may be. While these material achievements alone would merit our attention, it's her elevation of the clay vessel into the realm of the metaphysical that is most deeply satisfying. It gives purposefulness to the different wacky effects that Butterly achieves, seemingly without effort. The back-story is different, of course. Her technique is risky and unorthodox and, as the final results make evident, necessary. The pieces need to be fired many times, with each firing inviting ruin. In this regard, she shares something with the Abstract Expressionists as well as with contemporary abstract painters such as Thomas Nozkowski: an open-ended process in which disaster lurks behind every decision. She seems capable of getting any color or surface she wants, though the color was more muted in this exhibition. Butterly thinks in materials and seems to be guided by William Carlos Williams's dictum: "No ideas but in things."
The sculptures are animated in direct and unlikely ways; they seem to be simultaneously rising and collapsing, expanding and shrinking. The cracked surfaces remind us that we are looking at baked earth, and, to continue this line of thinking, the rough brown layer capping the top of "Burnt Sugar" (2010) evokes the top of a crème brûlée that has been left beneath the broiler too long. And what is that green stuff leaking out of the bottom? There is an upside-down feeling to "Burnt Sugar," which the orientation of the handles underscores, as if it were revealing the burnt bottom of a cooking pot. A weird, white stain has leaked out of the groove (from which a "rubber" sealing band seems to have "slipped") running along the edge of "Pantyhose and Morandi" (2010), suggesting two accidents. "Pile On" slowly twists as it rises, while the stack of stuff on top tilts. Sometimes, Butterly's stacks look like a Dagwood sandwich you might serve a voracious cartoon monster, hoping to appease it. Other times, I am reminded of the weird, gaudy hats that Hollywood forced Carmen Miranda and Anna May Wong to wear. But don't let the humor fool you, because the vulnerability of clay, its elemental properties, is very much part of the work's identity. In the universe defined by Butterly's sculpture, everything must obey the laws of gravity, reminding us that we are all things subject to laws over which we have no control. The green moss-like stuff extruding from the bottom of "Oasises" (2010) conveys the artist's tongue-in-cheek recognition that her powers are limited, despite her skill at controlling and manipulating materials. Instead of making ideal vessels whose perfection seems to deny time's power, she accepts its supremacy with disturbing humor. I can't think of another ceramicist who has used the historical convention of the clay vessel in such self-reflective ways. In her most recent works, Butterly further explores the vessel's interiors with gestures that invite a deeper visual and physical scrutiny. The inside, which is not always accessible, is as interesting as the outside. Our whole experience of the work becomes erotic and strange; we are looking at, and seemingly touching, a new body with which we will never become totally familiar. The body may be that of the Other, but it also may be our own. Whatever the case, the vessels—a metaphor for a woman's body and, in that sense, self-portraits—are beleaguered, stressed, and downright bumbling, as well as extremely self-confident,
unembarrassed, and unique. In sharp and sustained counterpoint to Samuel Beckett's pervasive pessimism, Butterly offers us something new under the sun.