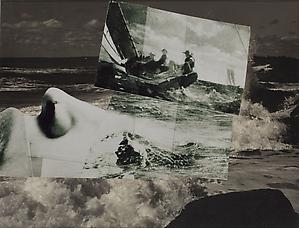 John O’Reilly’s first show at Tibor de Nagy is not his New York solo debut, though he hasn’t been in the public eye all that long. Now 81, he made his small, intricate photo-collages in private for many years, supporting himself as an art therapist in a hospital in Worcester, Mass., where he lives with the sculptor James Tellin.

By the early 1990s, word of the collages — or montages, as he prefers to call them — were circulating in the art world, and several were chosen for the 1995 Whitney Biennial. Since then Mr. O’Reilly has maintained a low but steady exhibition profile and has produced a substantial amount of new work.

The recent examples in this show are varied in subject and style, but share basic features. Most of the visual elements are lifted from art history, gay pornography and found vintage photographs, supplemented by photos taken by (and of) Mr. O’Reilly himself. The complex cutting and pasting, subtle and seamless, is entirely hand done, without digital assistance.

Several pieces are tributes to cultural heroes. Marsden Hartley is one, in a series of pictures that refer to a boulder-strewn coastal landscape near Gloucester, Mass., where Hartley lived for a while in the early 1930s. Montages dedicated to the poet Hart Crane, who committed suicide by drowning, are filled with oceanic images: in one piece photographed waves blend into the swirling drapery of a Hellenistic deity who, in this context, becomes the poet’s siren-muse.

And Classical allusions pervade pictures made in memory of the Alexandrian writer Constantine P. Cavafy. Images of shattered architecture, nude men and children in turn-of-the-last-century clothes combine to suggest the Homeric grandeur and autobiographical intimacy of Cavafy’s poetry.

Some of the most graphically concentrated compositions are also the most moving. This is true of “Nijinsky,” which combines a photograph of the dancer’s androgynous face with the painted visage of a Baroque goddess. And it’s true of “Princess’ Dance,” in which one of Velázquez’s Habsburg infantas is accompanied by the ominous shadow of a male figure, arm outstretched.

Is this an updated version of Death and the Maiden? Or an image of an all but invisible artist presenting us with what he has created? Or of an artist and his art becoming one thing, male and female, shadow and flesh? All of these readings are possible in Mr. O’Reilly’s boldly self-effacing and self-insistent work.