Tibor de Nagy is pleased to present an exhibition of recent paintings by Susan Jane Walp.  This exhibition will include 15 paintings all made since 2014. This will be Walp’s sixth solo show at the gallery and her first at the gallery’s 11 Rivington Street location.

Susan Jane Walp’s paintings are studies in color, surface, and geometry. She works on an intimate scale, with a rotating vocabulary of domestic subject matter, such as bowls of fruit, corks, utensils and folded pieces of printed paper. These works have a consistent precision and are undergirded by the artist’s unique concept of color and tone. This working method allows for many aspects of her work to remain constant, such as scale and subject matter, while also allowing the work to be always evolving and renewing itself.

Walp’s approach to painting was deeply influenced by the artist Lennart Anderson whom she met when he was teaching at a Boston University summer program at Tanglewood in 1968, and she again studied with him at Brooklyn College in the 1970s. Anderson taught a method of painting pioneered by the American portrait and genre painter Charles Hawthorne. Hawthorne’s technique was known as the “color spot” method, where a painting was begun by laying out areas of color, and then using the relationships between the colors as a springboard.  Anderson learned this method from Hawthorne’s student Edwin Dickinson, Anderson then passed it on to Walp. In speaking of  Anderson’s influence Walp states: “For lack of a better word (and one he might not approve of), it was an abstract world. Entering it was entering a realm of infinite possibility, and from the very beginning I loved dwelling in it.” Thus a tradition begun in the 19th century continues, through Walp's distinctive body of work, well into the 21st century. 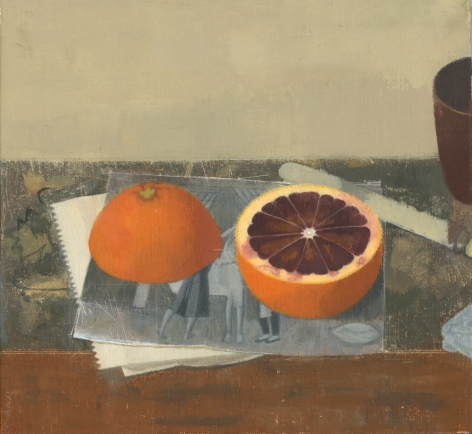